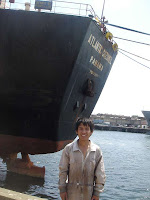 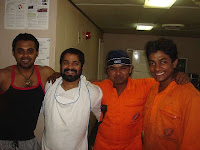 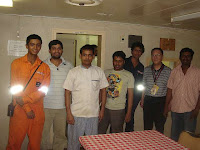 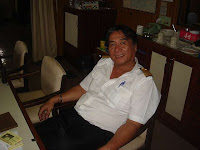 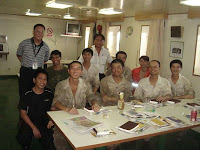 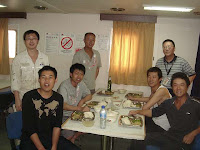 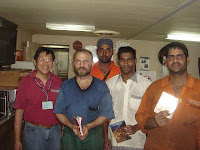 My wife Nancy has been diagnosed to have breast cancer about six
weeks ago. She already has taken chemotherapy two times. There will
be another 22 times of chemo treatments, then the surgery and radiation.
Please pray for her health. 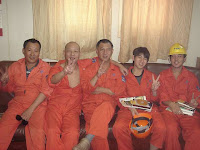 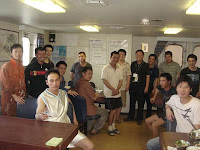 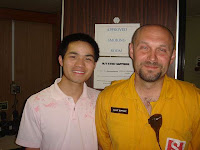 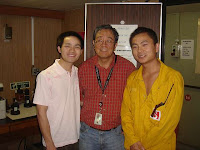 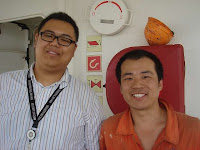 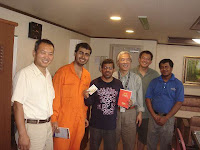 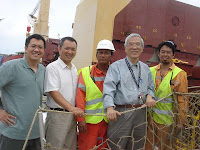 Grace to you and peace from God our Father and the Lord Jesus Christ.
(Phm. 3)

My wife Nancy has been diagnosed breast cancer a month ago. She is
taking chemotherapy for the following 24 weeks including this week, then
the surgery and radiation. Please pray for her treatment and health.

The grace of the Lord Jesus Christ be with you spirit. (Phm. 25) 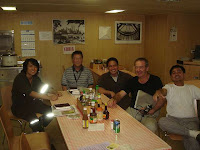 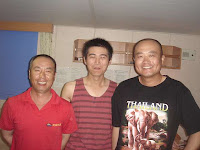 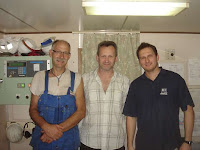 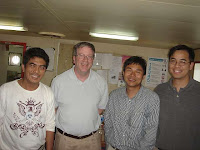 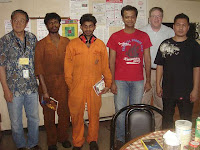 Grace, and peace from God the Father and Christ Jesus our Savior.
(Tit. 1:4)

ships visited this week
8 ships on Tuesday:
STAR EVVIVA, SICHEM OSPREY, FRANZ SCHULTE, STOLT
CAPABILITY, RICKMERS ANTWERP, PURWATI, SABRINA
VENTURE, and ANTAEUS - All Filipino; Filipino, Russian, and
Ukrainian; Filipino, Polish, and Estonian; Filipino, Latvian, British,
and Swedish; Filipino, Polish, Romanian, and Chinese; Indonesian,
Pakistani, and Chinese; Chinese, and Myanmar; Russian, and
Myanmar. We were on the first ship last Dec., the third ship last
Feb. (See pic. 1 for some of the crew on the fifth ship). (See some
of the crew on the seventh ship). Prayed with them and shared the
Jesus story with them. They love to accept Jesus as their friend.
Steven Chao from WHCC came and helped the ministry today.
4 ships on Thursday:
CLIPPER TOBAGO, COVE ISLAND, SICHEM PARIS, and BBC
ROMANIA - Filipino, and Polish; Filipino, and Russian; Russian, and
Ukrainian; Russian, and Ukrainian. We were on the first ship last Jun.,
(See pic. 3 for part of the crew). We visited the second ship last Apr.,
the third ship last Sep., the last ship last Apr. Prayed for the ships
and blessed their crew.
2 ships on Saturday:
CHEM LEO, and TORM CAMILLA - Filipino, Indian, and Russian; All
Indian. We were on the first ship last Dec. There were five Indian
Christians on board, second mate, third engineer, two motor men, and
one able seamen. (See pic 4 for the captain on the far left). (See pic. 5
for some of the crew). We prayed with them and watched the Jesus
film with them. There were two Christians on the second ship, the
second mate, and one ordinary seaman. We had a short visit on it.
Weibin Lu from West Houston Chinese Church, Yates Lee, and David
Frankel from WHCC, META group came and helped the ministry today.

My wife Nancy has been diagnosed breast cancer three weeks ago. She is
going to start the chemotherapy next week for 24 weeks then the surgery
and radiation. Please pray for her treatment and health. 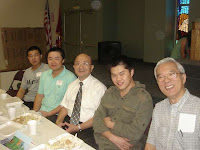 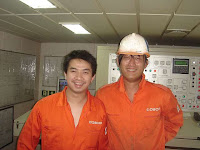 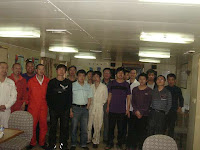 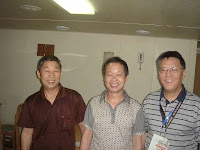 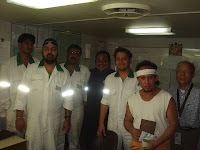 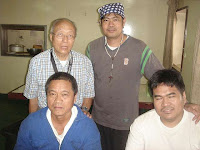 Grace, mercy and peace from God the Father and Christ Jesus our Lord.
(2Ti. 1:2)

ships visited this week
1 ship on Sunday:
IKAN ALTAMIRA - Filipino, Polish, Ghanaian, and Chinese. We
were on this ship last Friday, six of the crew has been changed. I
took three seafarers to Houston Chinese Church this Am. They are
so friendly and lovely. (See pic. 1 for church pastor, YingDau Lu
and them). We went to China Town and Wal Mart, then came back
to the ship in Pm. What a wonderful day for Jesus.
10 ships on Monday:
UNION ANTON, CLIPPER ANN, SAFMARINE ANGOLA,
CHEM PGASUS, MERIDIAAN, GETALDIC, LEOPOLD STAFF,
and ICE FLAKE - All Filipino; Filipino, and Polish; Filipino, Bulgarian,
and Ukrainian; Filipino, Indian, and Ukrainian; Filipino, Dutch and
Ukrainian; All Croatian; All Polish; Ukrainian, Russian; Polish, and
Latvian. We visited the first ship a year before last Apr., the second
ship last Jan., the third ship last Aug., the fourth ship last Jan., the
sixth ship last Mar., the seventh ship last Dec. Prayed with them and
blessed the crew. Mostly receptive.
YI CHANG HAI, and JIANXINGHU - All Chinese; All Chinese.
An initial visit on the first ship. We were on the second ship last Jan.
(See pic. 2 for some of the crew). Prayed with them and gave them
theScriptures and Gospel materials.
8 ships on Tuesday:
IKAN ALTAMIRA, YI CHANG HAI, and CHIPOLBROK MOON
- same as above; All Chinese; All Chinese. We were on the first ship
day before yesterday. The second engineer called me, and wanted me
to take him to Wal Mart to clear a business transaction. So we did.
(See pic. 3 for the crowd on the second ship). We shared the Gospel
with the commissar. He was really open and knowledgeable about
Christianity. He welcomed Jesus into his heart, but he still denied his
belief. We were on the last ship last Aug. (See pic. 4 for two of the
seamen on board). Prayed with them and blessed the ship.
STAR SAVANNAH, CHEMICAL MASTER, PLEIADES LEADER,
PREMA ONE, and TESSA PG - All Filipino; Filipino, Indian, and
Myanmar; Filipino, Romanian, Indian, and Vietnamese; Indian, and
Myanmar; British, Polish, and Guinean. We visited the first ship last
Jan., the third ship last Nov., and the last ship last month. There was
one Indian Christian on the second ship, the chief mate. There was
one Indian Christian on the fourth ship, the third engineer. Prayed
with them and blessed the crew.
Steven Chao from WHCC came and helped the ministry today.
6 ships on Thursday:
IKAN MANZANILLO, AFRICAN KINGFISHER, MAYA,
COLCHESTERCASTLE, WIGEON, and SOUTHERN FIGHTER
- Filipino, and Chinese; Filipino, and Korean; Filipino, Indian, and
Mexico; Bulgarian, Ukrainian, and British; All Russian; All Myanmar.
We were on the first ship last month, (See pic. 5 for some of the crew).
We visited the third ship a year before last Sep., (See pic.6 for part of
the crew), and the last ship a year before last Jul. Prayed for the crew
and blessed their ships.
Someone from Fort Bend Community Church came and helped the
ministry today.
8 ships on Friday:
TINTOMARA, IKAN ACAPULCO, STOLT FLAMENCO,
CALYPSON, DHONOUSSA, GASCHEMHUNTE, MOTTLER,
and CHONG MING - All Filipino; All Filipino; All Filipino; Filipino,
and Swedish; Filipino, Greek, and Georgian; Filipino, Russian, and
German; All Ukrainian; All Chinese. We visited the second ship last
week, the fourth ship two years before last Mar. We were on the
fourth ship a year before last Feb., the fifth ship last Jan., the last ship
at two weeks ago. Prayed with them and they all our friends.
Payton Huang from West Houston Chinese Church came and helped
the ministry today.
1 ship on Saturday:
IKAN ACAPULCO - All Filipino. We were on this ship just yesterday.
I took Brother Joy, the second mate, and Julius, the third engineer to
Fry and Best Buy for their merchandise exchange and repair. Then we
ate out in a Chinese restaurant. We had a wonderful fellowship
together.