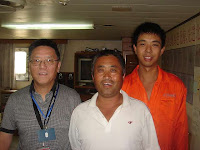 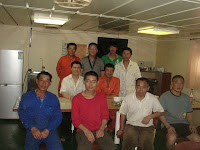 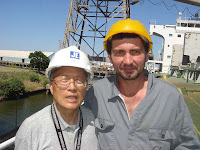 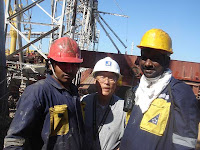 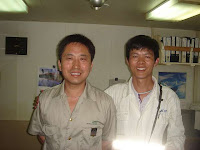 Grace, mercy and peace from God the Father and Christ Jesus our Lord.
(1Ti. 1:2)

ships visited this week
10 ships on Monday:
CENTURY PEARL, CLIPPER ENDEAVOUR, KEN UNITY,
FERMITA, INFINITY RIVER, SHIPPAN ISLAND,
MEDITERRANEAN HIGHWAY, CLIPPER CARIBE, BBC
THAMES, and CLIPPER LANCER - All Filipino; All Filipino;
All Filipino; All Filipino; All Filipino; Filipino, and Russian; Filipino,
and Bulgarian; Filipino, Croatian, and Myanmar; Filipino, Russian,
and Ukrainian; All Russian. We visited the first ship a year before
last Jul., the sixth ship last Dec., the eighth ship last Jan., the last
ship a little bit over two weeks ago. Prayed with them and blessed
the ships. Gave away Scriptures and Jesus DVDs.
3 ships on Tuesday:
BEIHAI, HUI AN, and GOLDEN MILLER - All Chinese; All
Chinese;Filipino, Russian, and Myanmar. We were on the first ship
two years before last Feb., and the last ship last Aug. (See pic. 1
for some of the crew on the first ship). Prayed with a sick fitter. He
was transporting from the ship to the hospital because of severe
stomach pain. (See pic. 2 for part of the crew on the second ship).
Shared the Gospel with three seamen. The name of Jesus worked
as a dynamite. They wanted Jesus to be their best friend and Lord.
Steven Chao from WHCC came and helped the ministry today.
9 ships on Thursday:
PANNONIA G, MTM HAMBURG, HAMAJACQUINLINE, and
PIRIN - Romanian, and Italian; Myanmar, and Russian; All Indian; All
Bulgarian. We visited the second ship last Feb., and the last ship last
week. (See pic. 3 for the Romanian seaman). There were two
Christians on the third ship, chief cook and bosun. (See pic 4, bosun is
on the right). Took two seamen to Seafarer Center on the last ship.
KEN UNITY, STAR FLORIDA, BBC THAMES, RICKMERS
HAMBURG, CHEMBULKYOKAHAMA - All Filipino; All Filipino;
Filipino, Russian, and Ukrainian; Filipino, Chinese, Romanian, and
Ukrainian; Filipino, Myanmar, Indian, and Hungarian. A revisit on the
first ship and the third ship. We were on the second ship last Feb., the
fourth ship last Dec., the last ship a year before last Nov. Prayed and
blessed the ships.
4 ships on Friday:
JO ACER, ZIA BELLE, QUEEN ACE, and IKAN ALTAMIRA -
All Filipino; All Filipino; Filipino, Japanese, and Korean; Filipino,
Ghanaian, Polish, and Chinese. We visited the second ship last Nov.,
the third ship last Mar. We were on the last ship last week. They all
have shore passes. Just to find out if they can come to church Sunday
Morning.
3 ships on Saturday:
IKAN ACAPULCO, BBC NORTHSEA, and GLOBAL ACE - All
Filipino; Russian, Ukrainian, German, and Latvian; All Chinese. We
were on the first ship three weeks ago, the last ship last Jul. (See pic.
5 for the captain on the left and the chief mate on the right). Two
minutes before I arrived the ship, a ship chandler called me and told me
the captain is a Christian and he wanted to see a pastor and he wanted
to getbaptized if possible. I got on the ship, had met with the captain
and explained a little bit about baptism to him. He called out the chief
mate, the second mate and the third mate to his room and asked me to
preach to them. I briefly shared the Gospel to them and asked them
to received Jesus into their hearts. We simply did the salvation prayer
and they accepted Jesus Christ as their Lord and Savior. Then I
baptized the captain in front of his comrades. Praise the Lord.